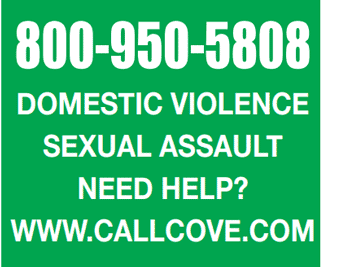 The mission of COVE (Communities Overcoming Violent Encounters) is to provide shelter, protection and advocacy to victims of domestic violence and sexual assault as well as to educate the community on the root causes of violence.

Services are provided in Mason, Lake and Oceana counties to men, women and their children.

To donate to COVE or for more information, call (231) 843-2541 or visit their website at callcove.com. Visit the COVE Facebook page for current events and information.

ARE YOU IN NEED OF HELP LEAVING A DOMESTIC VIOLENCE SITUATION? CONTACT COVE NOW BY CALLING THEIR 24 HOUR EMERGENCY CRISIS LINE AT 1-800-950-5808

COVE, established in 1978, was created to provide shelter, protection and advocacy to victims of domestic and sexual violence and/or homelessness and to educate the community about the root causes of violence. For more than thirty years, survivors in Mason, Lake and Oceana counties have turned to COVE for help.

Originally COVE was formed by a group of volunteers because of lack of support system for sexual assault victims in Oceana county. In the beginning, the grass-roots volunteer program ran through Community Mental Health and operated out of donated space at what was the Department of Social Services. In the summer of 1978 a group of volunteers established the 24-hour crisis line and in 1979 COVE functioned out of Hart with a “safe homes” network which were private residents offering shelter to victims for only three to five days.

The first shelter, which was a group home living and offices together, opened in 1981 and continued in Hart until 1983. By then we were officially serving victims of domestic violence as well as sexual assault survivors. As time progressed we added staff to expand services and in 1985 a part time Outreach Services position was added in Ludington to broaden COVE services and extend its coverage. By 1988 the shelter facility moved to Ludington and COVE service area was redefined by the state of Michigan.

The organization’s name officially changed to Communities Overcoming Violent Encounters (COVE) in 2004. In late 2014, a Child Advocate was added to staff to specifically work with children and identify their needs in order to better provide a voice for them and their families. In February of 2015 COVE moved to its present location from a 113-year-old home as its shelter and separate modular offices. The new state of the art, purpose driven facility is the first of its kind in Michigan doubling its residential capacity and allowing COVE to expand all its services to clients.

In January 2017 COVE opened it 24 hour/365 Sexual Assault Nurse Examiners Unit in its multi-purpose offices and shelter facility built in 2015.

Information on other emergency shelters can be found by visiting michbiz.com 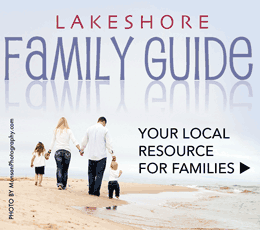 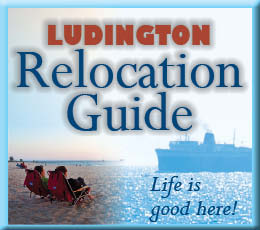